Book Library of the Cave of The Treasure 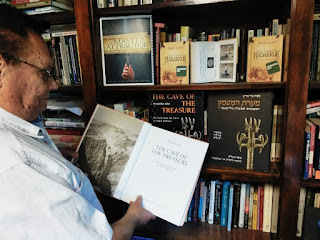 Posted by Mandy Lender at 10:29 AM No comments:

Uncovering the Treasure in the Cave

On March 21, 1961 I was in The Cave with Pessach Bar-Adon and a few others, watching how the treasure was unearthed.  That's 58 years ago.  I remember the day, the moment and the next day like yesterday.

Watch this 15 minutes video to see and hear some of my eyewitness account.

How the Treasure was First Uncovered In the Cave

The Cave of The Treasure Blog

This Site is Continuously Under Construction and Revisions.


THE CAVE OF THE TREASURE

A SHORT MEMOIR
BY

This tale has passed through the prism of my mind and memory after fifty-eight years since it happened.  Memories fade with time.
For visual evidence the reader is directed to external links that exquisitely depict selected items out of over four hundred and thirty two that were uncovered in the cave.  In 1961 there were no digital cameras.  Photographic equipment was bulky, heavy and expensive.

I was twenty years old in 1961.   At that period I served a thirty months stint of military service in the Israel Defense Forces.  I was recruited in November 1959 and assigned after arduous boot-camp training for training as a military paramedic in support of field unit in the army.  My job was similar a medical assistant providing first aid, dispensing medications, giving shots and taking care of sick soldiers that were in isolation due to minor illnesses.  Those were my routine duties   Most of the time we spent in field conditions on the borders of Israel.
In early March 1961 the first sergeant that was in charge of the medical unit called me, unexpectedly, asking if I am willing to volunteer to go on detail attached to a special operations unit as a paramedic.
That unit was assigned to provide logistical support to an archaeological expedition going to the Judean Desert to do further digging in pursuit of ancient biblical scrolls.
The overall archaeological expedition consisted of four smaller separate units.  Each unit was assigned to a different canyon in the Judean Desert.  The sub-expeditions were separated from each other and had to be self-sufficient.

The geography in the eastern slopes of the Judean Desert Mountains is such that deep canyons cut through it and divide the desert.   Traveling the short way on vehicles between canyons is impossible.
The top of the mountains was under the control of the Jordanian kingdom that was in a state of war with Israel.  The slopes fell into the Dead Sea as rock walls each 1,000 feet high.
You can parachute down to the bottom of the canyon and do mountain climbing your way back up.   Alternatively, if you are friends with the Israeli air force it will provide you a helicopter  ride to hop your way from camp to camp.  But that option was not open to us, the foot soldiers.
I didn’t hesitate and I volunteered to go without losing a moment for further thought.
I packed and went.  Before departing my home-base I sent a letter to my parents telling them that I am going to be fine but unable to communicate for three weeks.   The special operation unit set out south towards Beer Sheba.
On the road south we were joined by civilian professional archaeologists and volunteers.  Some of the volunteers were archaeology students others were volunteers visiting from abroad.
Next at the dark of the evening we started a long night trek on rugged field cars.  A trailer was hitched to each all-terrain vehicle carrying supplies, food, communications equipment and water.  Using helicopters was unsafe because the noisy chopper will attract the attention of the hostile neighboring Jordanian military and the chopper may be shot down.
Our guide in the desert was a native Bedouin who knew the terrain.  He didn’t seem to need a map.  I was lost after the long night travel in the rugged desert terrain.
We set a tent base-camp in a location that looked strange to me.  Nothing like I ever saw before.  Yellowish pointed rocks and cream chalky mountains with steep canyon ending in a bottomless unseen abyss.  Anywhere I turned there was a steep canyon in front of me.  Through one canyon I could see a sliver view of the Dead Sea.

Together with us came a large man with a bushy mustache that ended in spiraled thinning curled hair alongside each cheek.  He was a navy shipmate whose expertise was braiding rope ladders.  In the first morning he set out to handcraft a rope ladder.
In order to get into a cave in wall of the canyon we’d need to step down 40 feet from the cliff using the rope ladder.
We reach descended the rope ladder carefully, very carefully to protect our own dear life, or else we’ll land a thousand feet in the abyss with a body shattered into red bloody splotched pieces of human remains.
The cooks set up their field stove and started to prepare from cans and preserves field meals.   Each one of us pitched a personal tent in picnic style.  It was a brown colored picnic scout tent.  The creamy brown  color of the tarp matched exactly the color of elevated desert. My tent became my home and my clinic for the next two weeks.  I also carried with me crates of first aid supplies and medications.  We had an ambulance  that chugged along us.  However, a real life threatening emergency will require calling a medivac chopper for quick evacuation.

In the mornings we ate breakfast consisting of fried eggs, toast and some last week vegetables.  Then we’ll each bring along with us our personal water canteen and personal semiautomatic Uzi weapon and walk a narrow trail towards the edge of the cliff.  There we file in a line to descend down the rope ladder holding to dear life, and entered the four millennia old cave.
Inside the cave the digging was done using small hand picks tools and baskets to carry the dirt.  The dirt was sifted through a sieve to trap any possible minor finding.  We moved about the cave with bent necks and lowered head while our chins touching the chest.  A careless move or too much movement created a cloud of dust that irritated the windpipes.
In the early afternoon we’ll start a slow climb back up to the rim and walk to our little base-camp.  We’ll take a face wash under a field shower-stall and grab dinner, eating from metal pans.
Every evening after dinner we sat around a bonfire under the stars.  Coarse ground coffee was cooked Mediterranean style in a large metal pot over the camp fire.  Potatoes were roasted over the bonfire and we either sang along or listen to stories.
The story-teller was our expedition leader – Pesach Bar-Adon.  For many years he lived among the Arabs and Bedouins in Palestine.  He listened to their folk-stories and wrote a book with about their folktales.  Then we were tired enough went each to our tents to sleep.

The digging started inside the cave on March 14, 1961.  After a week of work not much came up; no new archeological discoveries.  We felt disappointed.
Then on March 21, 1961 a student and another soldier hit a crevice that opened up.  Through a crack they saw some objects that they pulled out and then yelled “There are some more”.
They kept on pulling out more and more artifacts until it became best to stop because of the falling night and darkness in the cave.   It was necessary to wait for a professional camera and lighting to be brought in from another a camp the next day in order to photograph and document the discovery process and the numerous rich findings in situ.
The excitement was high.  No one could sleep that night.
Next morning with cameras in hand and place and better equipment,  more and more objects were pulled out from the crack.  Eventually 432 objects were uncovered.
Most of them bronze and copper and some were ivory tusks.
It turned out to be literally a treasure in the full sense and the meaning of the word.
The archeological world seized with this story of discovery.
The artifacts were later dated by carbon-14 and determined to have been manufactured in the chalcolithic period – sometime between 4,000 to 3,300 years BC.   Over millennia many visitors came in and left the caves of the Judean Desert.  It's plausible that many visited this particular cave.
The purpose and utility of the objects remains a mystery.  It’s a puzzle that remains unsolved.  In the last 58 years research work of many methodologies and modalities, was published.  Some "scientific articles" carry blatant simple factual dating error on the day and time of the discovery.
All of it is speculative.  The original owners of the hoard are not known.  It is thought that the artifacts were used for religious rituals.  Some "authorities" reference the hoard to the Ghassulian culture.   Speculative.

The majority of the hoard is on permanent display in the Israel Museum in Jerusalem.  Some representative artifacts are on display in the New York Metropolitan Museum.

Here are LINKS to photographs and posts: